At the Teched 2013 in Amsterdam I participated in the Innojam. Before the Teched, I was little aware of the impact and possibilities of the new direction SAP is taking when it comes to user interfaces. With the choice for SAPUI5, eclipsed base technology, SAP is making a huge step in the right direction according to me.

Since this was my first time, I was not really certain what to expect. I knew none of the other participants. At the check-in desk I had to choose for one of the topics that were to be the issues for which a technology would be constructed. Since I mainly work in a business to business environment, I chose to support a medical professional situation.

The whole process from business issue to a technical solution can be found on the InnoJam wiki: http://wiki.scn.sap.com/wiki/display/events/InnoJam+Amsterdam+2013%3A+Team+%234+Documentation

All the steps we performed in the Design Thinking process are documented there. The group dynamics were also quite interesting. We went through the forming, storming, norming and performing phases that occur when a team of strangers is formed.

For me the interesting part was when it came to the coding. We used the SAP tools SAP HANA and SAPUI5. Both of these tools I had seen in the open.sap.com ‘Introduction to Software Development on SAP HANA’ online course. But this time, I had the chance to really work with them. 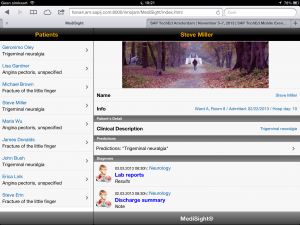 Hospital handover application for a doctor with patient information. The blue indicates recent changes in the patient status. 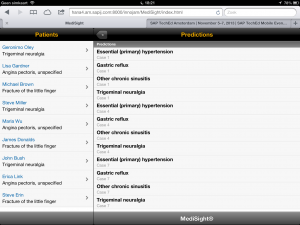 Based on the Hospitals large (anonymized ) database, similar cases are shown so that the doctor can take previous experiences into account.

Luckily, in our team we had someone experienced in javascript, since this is the main language needed to develop the user interface. I was able to sit next to him, help a little bit, and learn quite a lot. In the end we produced an application that runs in html5 on several devices, based on HANA. See the screenshots taken from an Ipad.

This took some serious team effort and programming for about 15 hours (most part during the night). Taken this into account, the result is not too bad. In the end our team was rewarded with the ‘usability’ price, which to me is the most important price, next to winning the innojam altogether.
Personally of course I gained a lot of experience I wouldn’t have without the Innojam.

In conclusion: the new SAPUI5 tools are very powerful. The HTML5 generated by these tools will make it possible to support several devices in an easy manner.

Next post: SAP BO Design Studio – where do we stand