The UvA live with UvAdata!

The University of Amsterdam is live, for several months now, with the new major release of UvAdata, the management information system of the UvA. As external project manager and BI consultant I had the pleasure to contribute to the success of this project.

Introduction
UvAdata is an enterprise datawarehouse that consolidates data across the University concerning Education, Research, Finance and HR with the main goal to support decision making for managers. It provides a single, comprehensive source of the current and historical information, based on a standardized data model and common definitions and semantics. UvAdata is within the University of Amsterdam the single version of the truth. Users have acces to the data using a BI application build with SAP Business Objects Design Studio 1.3.

The UvA uses for more than 10 years SAP BW as the enterprise datawarehousing tool, and has slowly but steady invested in expanding and consolidating datasources. Over the years this has resulted in more than 100 reports, with each adding insight in presenting the data. After 10 years, all these insights are bundled into best practices, and the technical upgrade from SAP BEx WAD3.5 to the latest tool SAP BO Design Studio has been used to improve the business user experience.

The goal of this release was to improve on:

Easier to find reports
With more than 100 reports, it is not easy for users to find the right report. 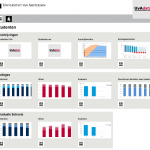 In the new release the startscreen represents the most significant report area’s with tiles. With a mouse over is shown what type of reports are behind the tile. After pressing the tile small pictures of the reports are shown. When these are pressed, the reports start. Finding reports has become easy and intuitive.

The UvA has used SAP Design Studio to implement the reports in this release. Together with users a template has been developed, to establish an easy to use interface. The requirements are that the interface is easy enough for irregular users, but has enough options for frequent users. The first reactions on ‘easy to use’ have been positive, especially compared to the old ‘context menu’, which for a lot of uses was to complex. In fact, in the latest release (DS1.4), the ‘context menu’ is available again, but at the UvA it will not be used as an opion. 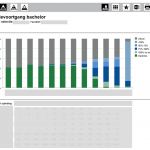 Also with the development of the template, some rules have been defined on how to build meaningful reports, especially the use of graphs has been reviewed using the books of Stephen View. This means 3D graphs, pie charts and a lot of silly graphs have been avoided.

Apart from the interface, big improvements have been made in making the reports easier to understand by declining the use of jargon and departments specific terminology. And finally, the Wikipedia that serves as the help function, has been improved.

The management information system had grown over the years. For users it was not always clear what type of report they were looking at. In the new release a report is now one of following three categories:
1. Dashboards
– Only filtering possible
– Norms, goals and contracts, compared with actuals
– Primary the user group is academic management
2. ‘Dossiers’
– Primary user group is staff
– Single purpose reports
3. MAD reports
– Primary user group is everybody interested in gaining insight on a certain topic
– Monitor, Analyse, Detail (see blog)

By dividing the reports in these categories, several purposes have been served:
Provide information for the academic management
– Information is ready when needed, up to date, reliable, consistent and agile -> Dashboards & MAD reports
Contribution to the professionalization of the management culture
-Common language on definitions -> Dashboards
Contribution to professionalization of the academic support
-Saving time in the collection of data; -> Dossiers
-Opportunities to seek relationships analysis -> MAD reports
Contribution to enhancing the quality of the administrations;
-Errors are more likely to be detected -> MAD reports

With this new release, the UvA has made a significant step in supporting the UvA management with management information.

In conclusion: the new release focused on the improvement of three major topic’s: Easier to find reports, Easier to use and Clear report categories.