The previous week I went to the training ‘Presenting Data Effectively’ with Stephanie Evergreen in Amsterdam. For almost 5 years I have been subscribed to her newsletter from the website https://stephanieevergreen.com. I often have been inspired by the letters she writes. When I read in her newsletter she would be in Amsterdam to give training, organized by Goof from https://graphichunters.nl/, I definitely wanted to go. I was a bit starstruck to be honest.

I loved the training.

Stephanie is a really good teacher with great teaching skills who has a lot of knowledge and background in the science of presenting data.

I really enjoyed using the 4 step process to make the data visualization development a structured activity. Start with ‘What’s the point?’. Move to ‘Who is the audience and how will this be delivered to them?’ From there to ‘What is the best chart type?’. And finally end it with ‘How can you sharpen the point?’.

With step 3 came an Excel with sample data and we learned how to create some impressing graphs using Excel. I found the proportion plot the most impressive. 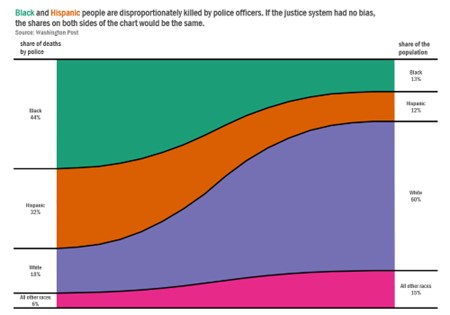 Another very useful insight concerned step 2, ‘ Who is the audience?’. The audience is somewhere on  a line. On one extreme side, the audience wants to see clear graphs, that points straight to the conclusion. If the graph is complicated and they don’t understand it, they won’t trust it. On the other extreme side, the audience likes to see the nuance in the graph. If the graph points too directly to the conclusions, they won’t trust it. So knowing your audience is important in choosing a graph.

In the end, I felt my biggest take of the course was step 4 ‘How can you sharpen the point?’. Too often it is assumed that the data speaks for itself, but that is usually not the case. Tell what the graph is about. Point at what is interesting. Don’t let the viewer search for meaning in the graph.

Last week I had to give an update on the project I am a project manager for. It was about the items we took in after going live, and how much of these items are solved. All the questions and comments were noted down after going live with the project. Some of them were really important, and we tried to solve those as quickly as possible. Others are just noted and will be answered later.

Since it was about ‘Hey, things changed over time’. I check the possible graphs to tell the story of the progress we made. I ended up using the accumulated numbers of total items and solved items. I started with a line graph, but I wanted to put more weight on the solved items, so I made those columns. I increased the width of the columns and cleaned up the graph. In the end, it was obvious that there is still a big gap between what we solved and what is still open. So then it was time to ‘sharpen the point’. I stated in the title the point. Of the open items, 11 are issues of which 7 are issues with a high priority. The numbers were formatted in bold, to emphasize on the 11 and 7. This to leave the message in the mind, that 7 is the number to focus on.

This is how the graph turned out. 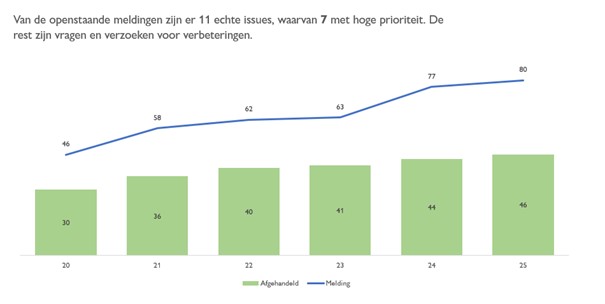 The day after, in the Q&A session, the focus was on the progress made on these 7 items. Instead of all the other open questions still remaining. Which was exactly the message I wanted to get across.

I felt my training day was a day well spend.